Have you ever wondered about fake followers and celebrities on twitter? Have you ever watched a new account that seems to have a massive following within hours of creation? I am fairly new to twitter. In fact I have only truly become an active member three months ago. In that short amount of time I have come across over 1500 people that now follow me. From those followers numerous friendships have grown and blossomed. I even had the pleasure of meeting a few of them face to face. But how can you meet your followers if they aren’t real?

“We created all of our followers to ensure that you, as the client, get exactly what you paid for. So for those that need a legal disclaimer we should start by saying that: these followers are NOT real. Some of them may appear to be real and may have aged established dates, actual photos uploaded and a few tweets in the system but they are NOT REAL. We created them.” -FanMeNow.com

I can understand why buying a following could be attractive, especially for the hire managing the account. A fake following makes it look like you know what you’re talking about. What most people don’t understand is that while fake followers may boost your numbers, it decreases your engagement ratio. What I mean is if you have 5000000 fake followers, but only 1000 real followers, your activity level is the probably around the same for the person who only shows 1000 followers. While this may work for celebrities who want to broadcast their messages and look authoritative, I would never buy a following. I want to engage with my community and create authentic connections, which is also what I do for the brands that I manage. A fake follow is like a hunk of styrofoam, it just takes up space. It isn’t legit, and it doesn’t do my community any good.

So how can you know who has a fake following? Check out the free tool at fakers.statuspeople.com to see how you compare, and how your friends compare. Here is how my account looks too. 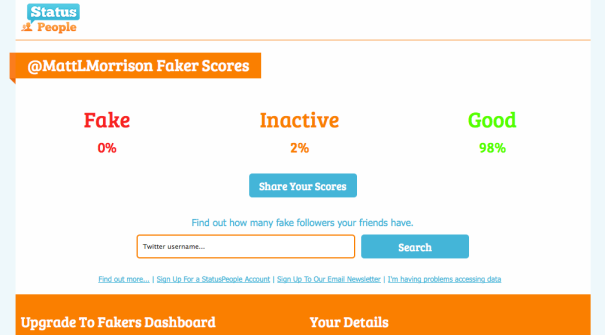 Why do I write about this today?  There is more and more talk about real business in New Media, or what we call Social Media.  I know our business is real and our relationships are taken outside of 140 characters.   If we want to massage our ego’s and give that appearance of someone more than you really are, then buying your following is truly an option out there.    Some have tried to discredit the tools that disclose a twitter handle’s following. Interesting enough those who try to discredit have a higher number of fake followers.  If you are wanting to hire a firm to help with your brands in Social Media, you can start by filtering a potential consultant through these kinds of filters that disclose fake following status.  Trumped up followings are not going to grow your business. If a person you are considering hiring is buying fake follows for themselves, you can bet they will do the same for you.  A massaged ego is not going to be paying the bills.  Apparently it’s not just the celebrities buying fake follows.

Working alongside my clients to develop a strategic plan to design and market their product or service in the correct markets.

2 comments on “Celebrities and Fake Follows”

I am interested to hear your thoughts, so leave some. Cancel reply